The ways in which we can connect are changing. People, homes, businesses, venues, even vehicles - are connecting in new ways, to improve the way we live, work, and play. With different places to connect to, and new things to connect with, TNS Tec. provides highly configurable, end-to-end network solutions that increase bandwidth, maximize space, enable fast deployments, migrate easily and offer great economy. Coupled with our capability to rapidly deliver our networks across the globe, some of the most vital and advanced networks in the world rely on TNS Technologies. The World, Connected.

The fiber-optic communication technology had extended the switch equipment of service providers to reach around the boundary of Residential subscriber area and business office region. In order to increase profits, attract new subscriber and retain existing customers, operator and service provider need to deliver new services with rich content such triple ply services, telemedicine, interactive gaming or e-learning which needed high bandwidth data transaction. FTTx is the technical application which can provide a rich kind of services over a single network. 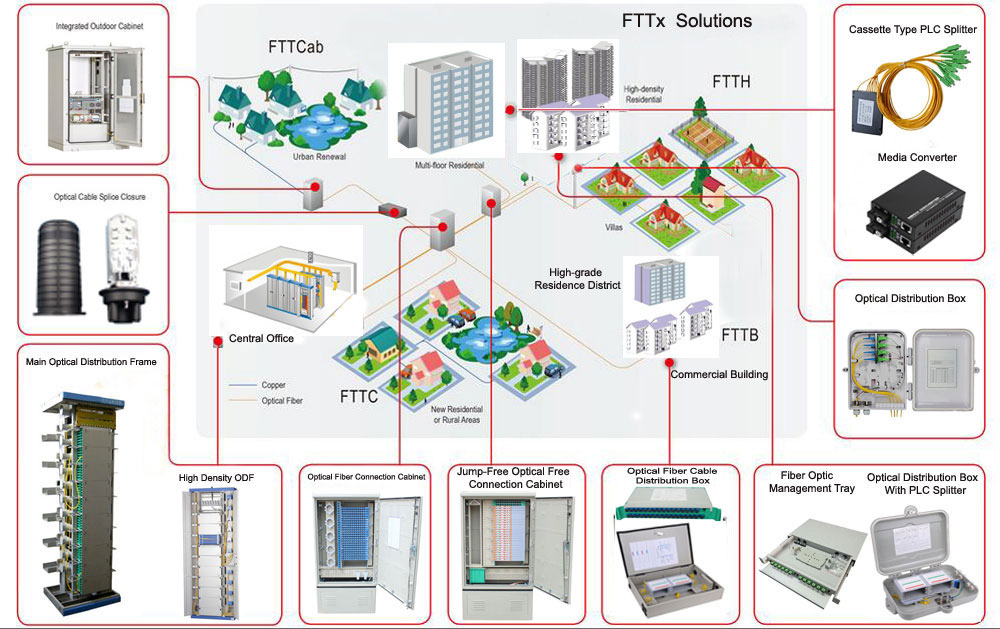 FTTx is a generic term for any network architecture that uses optical fiber which may come in many varieties. Depending on the type of last mail telecommunications : FTTB(Building), FTTC(Curb), FTTH(Home) and FTTN(Node). The importance of FTTx does not only offer the bandwidth of big pipe to make the user rapidly surf the Internet, download the music or video or access the documents stored in the file server of remote site quickly but also transform our daily life with potential benefits as follows:

There is no single FTTx solution can meet all requirements. Operators and service providers must select th unique on to help them generate revenues and then creating the maximum profits based on their service goals. CTS provides a comprehensive FTTx portfolio including CO site access switch, CPE site which supporting home, SOHO, or Enterprise units to address various levels of customer requirement. FTTx technology is definitely the powerful futureproof solution which will enable the life that we have to conceive of, but that we are certain will become necessities for living well and working well in the decades ahead.

The data center room wiring system is composed of two parts: SAN network wiring system and network cabling system. In computer systems engineering, must respect the room within the wiring of unified planning and design, wiring bridge routing must be integrated into the engine room and other kinds of pipeline, bridge, in order to ensure the implementation of the system is reasonable and orderly room. Data center cabling engineering with its flexibility, scalability to achieve redundant wiring management, the entire structured cabling system should be a comprehensive solution to avoid the emergence of a single point of failure. 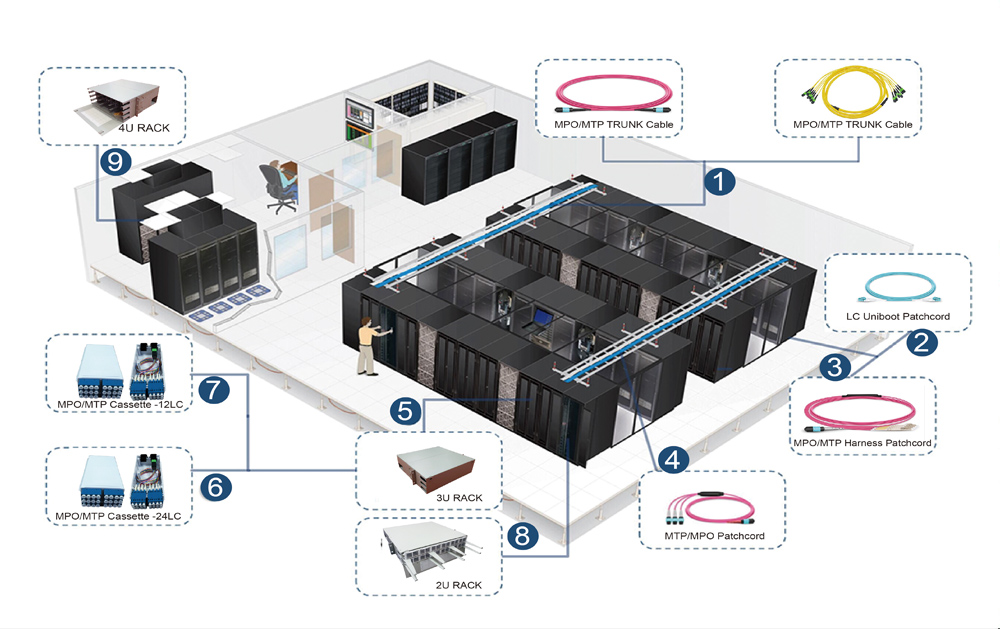 As we know, one 40G QSFP+（4 x 10 Gbps）port can be configured into 4 x SFP+ fiber channels, so we can also use MPO/MTP-LC fiber optic jumper to connect easily to 10G and 40G network equipment. 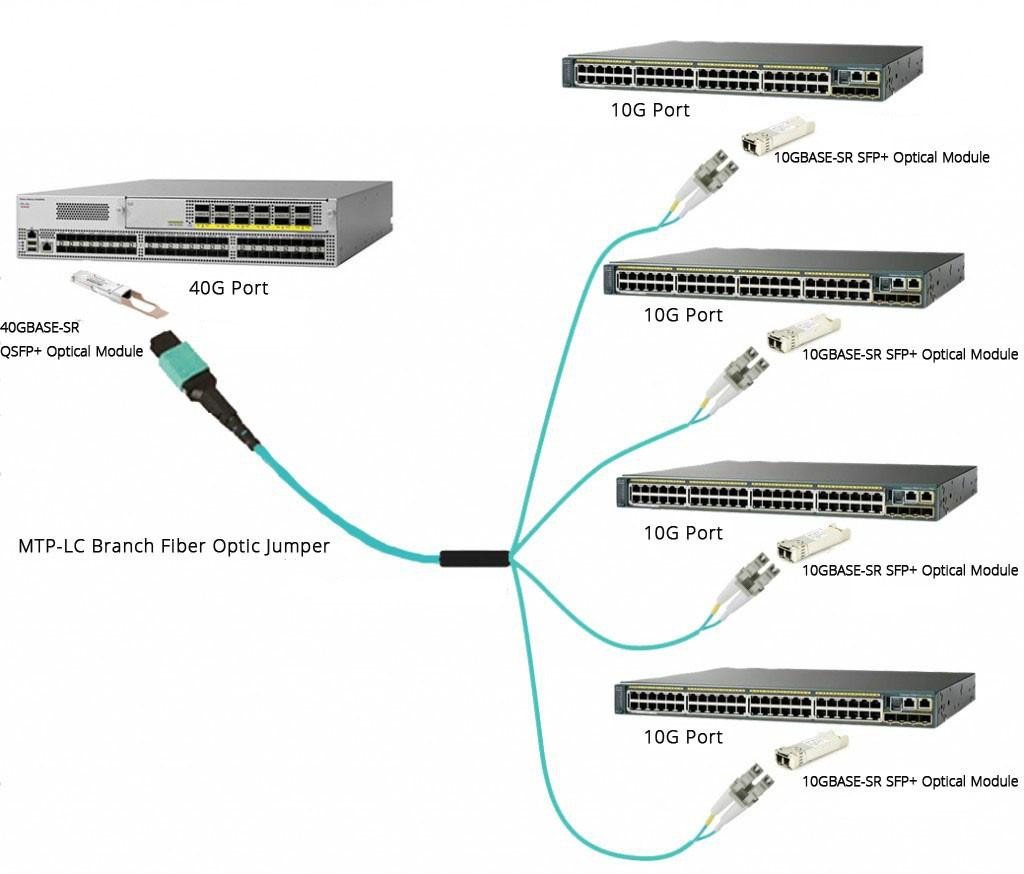 2016 can be said to be a milestone in the 100G Ethernet, in this year, CXP, CFP, CFP2, CFP4, QSFP28 and other 100G optical modules emerge in endlessly in the market. As a professional supplier, D-CONNECT offers the following 100G interconnect solutions:

24-core MPO/MTP fiber optic jumper supplied by D-CONNECT is an ideal solution to the interconnection between CXP/CFP optical modules, the diagram below shows the detailed connecting program: 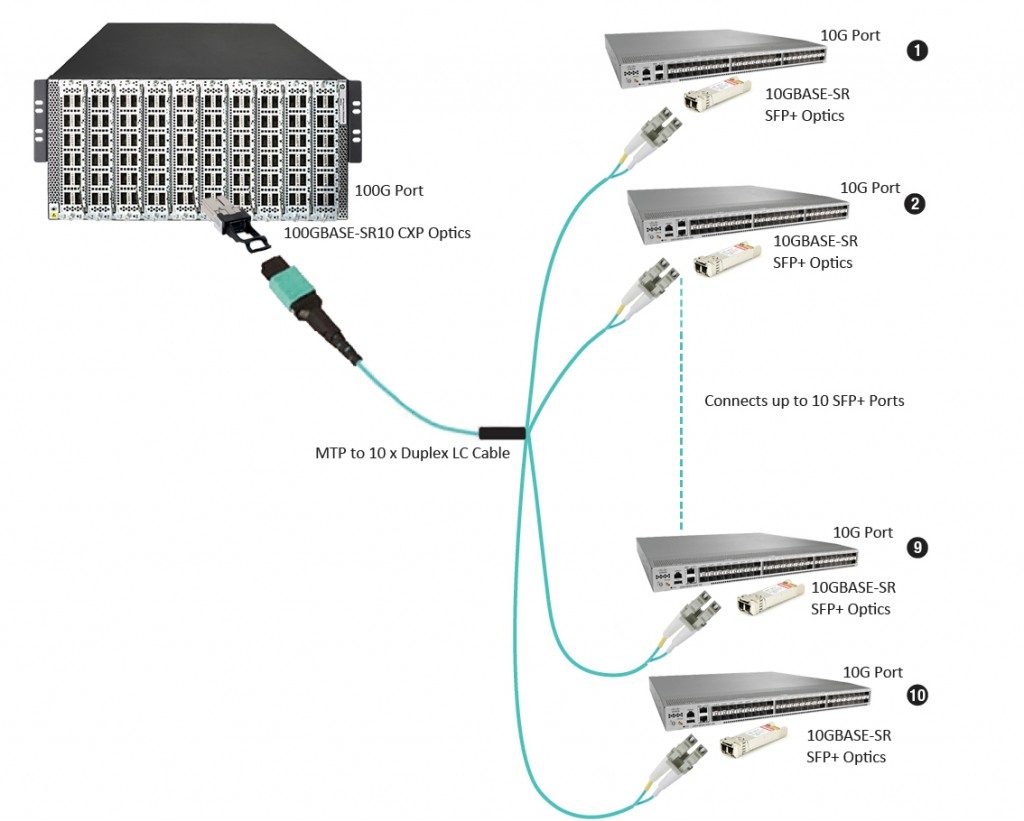 The "fifth-generation mobile communication" is called 5G for short. According to the timetable of the 3GPP organization, the R14 standard studies the 5G system framework and key technologies; the R15 standard is used to meet the 5G requirements of some scenes and opens the commercial process; the R16 standard will complete all the standardization work. R14 and R15 have been completed in March 2017 and June 2018 respectively, while R16 is expected to be completed in December 2019. And the final 5G complete standard will be submitted to the International Telecommunication Union (ITU) in early 2020.

According to 3GPP planning, 5G standards are pided into two types: NSA (non-standalone) and SA (standalone). Among them, the network mode of 5G NSA needs to use 4G base station and 4G core network, and 4G as the anchorage of the control surface, to meet the needs of the radical operators to make use of the existing LTE network resources to realize the rapid deployment of 5G NR (New Ratio).

In June 14, 2018, 3GPP held a plenary meeting in the United States to formally approve the freezing of 5G NR SA function. The 5G NR NSA standard was frozen in December 2017. At this stage, the full-featured full version 5G standard was formally introduced.

The main features of the 5G network include large bandwidth (up to 1Gb/s), low delay (1ns) and mass connection (connection density 106/km2), which provide new requirements for the bandwidth, capacity, delay and networking flexibility of the load-bearing network. The baseband signal of the 5G base station is transmitted digitally, using the eCPRI protocol interface (typical rate 25.16Gb/s). Considering the common stations with 4G, the CPRI option10 rate (24.33Gb/s) needs to be compatible.

5G is coming, and 5G optical network has tens of millions of demands for optical devices.

Optical communication devices are the core components of optical transmission network, bearing the functions of key network physical layer, such as photoelectric conversion, wavelength multiplexing and multiplexing, and distribution of optical power. Compared with the current 3G/4G network, the biggest change of 5G in wireless load-bearing network is the fronthaul and middlehaul. The 5G fronthaul refers to the connection between base station (AAU) and DU (Distribute Unit, dealing with physical layer protocols and real-time services), while 5G middlehaul is the connection between DU and CU (Centralized Unit, dealing with non real-time protocols and services).

The wireless base station is usually installed in the communication tower or the roof of the building. So the optical devices used in the fronthaul and middlehaul need to meet the use of outdoor scenes. The most important thing is that the operating temperature range of the devices needs to meet the requirements of the industrial grade, that is, from -40℃ to 85℃. Another indoor scene, by the way, is generally a commercial grade temperature requirement, 0℃ to 70℃.

In the fronthaul scenario, most of the transmission distance is below 10km, of which less than 5km accounts for about 80%, and 5km to 10km accounts for 20%. Of course, there will be a gap between the theoretical value and the actual application of the current network. And, there will be a problem that the attenuation of the link will increase as fiber aging and the distance of the coverage area might be at the critical value, so the transmission distance above 10km, such as 20km, will still be needed. In the middlehaul scenario, the transmission distance is between 10 and 40km, and there are two operating temperature requirements for industrial and commercial grades. For 5G fronthaul and middlehaul applications, Gigalight has launched (or will launch) a series of industrial-grade optical transceivers, including 25G BiDi/CWDM/DWDM/Tunable SFP28 modules for 10km/20km applications in the 5G fronthaul network, and 100GBASE-LR4/4WDM-40 QSFP28 modules along with 200G QSFP56 modules used for 10km/40km applications in 5G middlehaul (and backhaul) network. At the same time, we also offer industrial-grade passive optical components, such as 5G OMUX, CCWDM, and AAWG (will be released after the maturity of industrial-grade chips).

The function of optical transceiver is photoelectric conversion, using optical fiber as the transmission medium. That means the largest investment in the optical network is always the optical fiber resources, so the first thing to consider when selecting equipment and devices is how to save optical fiber. In view of the different scenes of 5G fronthaul, there are three options (25G SFP28 transceivers) to choose from now.

First, in the scene where optical fiber resources are rich, the scheme of optical fiber direct connection, also called One Fiber One Cell, can be deployed with 25G BiDi SFP28 optical transceivers for 10km/20km transmission. In general, there are three cells in one base station. So, the BiDi scheme only needs three optical fibers to meet the fronthaul traffic of one base station, and is conducive to the high precision synchronization of the clock. Among them, the downstream wavelength may be 1310nm or 1330nm, which is uncertain at the moment.

Second, in the scene where optical fiber resources are scarce, the WDM scheme of multiplexing all service wavelengths of a base station to a single fiber or a pair of optical fibers to save optical fiber resources, also called One Fiber One Site (Base-station), can be deployed. A lot of color optical transceivers are needed in the WDM scheme, which will cause inconvenience to installation, spare parts and maintenance. However, the tunable transceivers can be used to solve this problem. So, this scene mainly uses 25G CWDM/DWDM/tunable SFP28 optical transceivers (O-band or C-band), as well as industrial-grade passive optical components such as 5G OMUX and CCWDM modules.

Of course, the more efficient way is to sink the WDM devices directly to the base station and DU, that is, the active WDM scheme, which can be compatible with the current network 2G/3G/4G service, and can achieve more L3 layer business management and optimization functions. However, this scheme will increase the CAPEX.

Third, in the scene where backbone optical fiber resources are destitute, the passive WDM scheme with point to multipoint (P2MP) converging the traffic of multiple base stations to one DU, also called One Fiber N Sites (Base-station), can be deployed. For example, the commonly used 40 channel AAWG DWDM Mux/Demux can cover 6 base stations (each base station has 3 sectors, a total of 18 AAUs, 20 channels for upstream and 20 channels for downstream). This topology conforms to the PON based optical passive network and maximizes the utilization of the existing ODN networks.

At present, there is only commercial-grade AWG that is mature, with an operating temperature range from 0℃ to 75℃. In future WDM-PON and even 5G fronthaul solutions, the operating temperature range of AWG needs to be further upgraded to industrial-grade -40℃ to 85℃, leading more demanding requirements for thermal and athermal packaging, and the requirement for chip-grade athermal AWG is also further improved. Under the condition that the industrial-grade AWG is not mature, the installation environment is inconvenient to meet the commercial-grade temperature, but the optical power budget of the link can be met, we can consider using the PLC splitters (which can fully meet the requirements of the industrial-grade temperature at present). 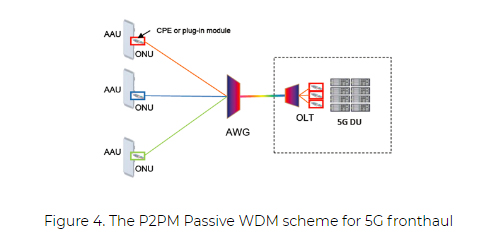 5G is a key milestone in the history of optical communication. For 5G optical networks, there is a huge market with so many challenges. Gigalight will keep providing customers with high-speed optical interconnection products with innovative designs and leading solutions.

We understand that a company's investment in structured cabling and fibre solutions is expected to fetch a long-term return, hence, we have a dyed in the wool policy for quality testing. We are committed to use only the best material and always exceed customer's expectations in terms of standard.All our products areROHS compliant and manufactured under a great degree of supervision and stringent in-process inspection.

Each of the manufacturing and assembly units is ISO 9001:2015 and ISO 14001:2015 certified.Strict qualification and evaluation of designs, material and processing methods ensure guaranteed customer satisfaction. Once manufactured, the products are sent to the QA team where each and every technical specification is checked and tested in detail.

A robust corrective auto-system is in place with firm focus on verification for troubleshooting.

We have all the products you need to build a full end to end network solution.

Sign up to our newsletter and be the first to know about latest news, special offers, events, and discounts.